Tias graduated in 1988 and has spent most of his career in Equine practice. After several jobs which included time in North Queensland, Victoria and Oakey, he started West Warwick Vet Clinic with Dr. Cathy Marlton. This practice grew to be the predominant practice in the area until the time it was sold it in 2004.

Tias then worked a season for the Scone Vet Hospital before heading to the University of Melbourne Veterinary Hospital. Here he consolidated his skills and qualified by examination as a specialist in Equine Surgery. He continued at the University of Melbourne Veterinary Hospital as the Head the Equine Centre, ultimately responsible for the care of all horses going through this busy teaching hospital. During this period he also spent time in North America, the UK and Singapore gaining experience.

Tias then returned to Queensland and spent a year at the University of Queensland Veterinary Hospital (Gatton) as a specialist equine surgeon.

In 2013, Tias decided to leave University life and started back in private practice based in Warwick, founding WEV soon after. As well as his private practice work, he has been heavily involved with the ANZCVS. He has recently stepped down from his roles on the Board of Examiners and governing Council of the ANZCVS and as chief examiner. He is also regularly lectures on various equine topics mostly in fields related to Equine Surgery.

Tias also enjoys supporting the equine veterinary community and regularly works with and advises veterinary colleagues both locally and internationally and provides consultancy surgery help to several practices around Australia.

Tias has wide ranging interests in the fields of equine practice. Special interests include surgery and lameness and he also enjoys the challenges of stud work during the breeding season.

Andrew is a local, growing up on his parent’s cattle property at Dalveen. He graduated from James Cook University in 2011 after which he undertook an equine internship at the renowned Goulburn Valley Equine Hospital in Shepparton, Victoria. Andrew spent a further eighteen months in Victoria working in a mixed practice in Geelong before completing a stud breeding season for Scone Equine Hospital in NSW.

Andrew moved to the United Kingdom in 2015 to further his knowledge where he worked as a stud and ambulatory equine vet. He had stints in Gloucestershire, Essex and Lincolnshire.

After five years in England Andrew has now moved back home to Warwick, commencing work with Warwick Equine Vets in November 2019.

Andrew enjoys all aspects of equine practice but has a particular interest in reproduction.

During his spare time Andrew enjoys helping out on his parent’s farm, riding horses, and trying his best to learn how to play polocrosse.

Edward completed his studies in Veterinary Science in 2020 through the University of Queensland, achieving a Bachelor of Veterinary Science (Hons). Ed is interested all aspects of equine veterinary practice. Throughout his time at university Ed gained experience in many areas of the equine industry holding positions at equine reproduction facilities, thoroughbred stud farms and assisting in a number of research trials. Ed is new to Warwick and is looking forward to joining the community and meeting the clients of Warwick Equine Veterinarians and their horses. 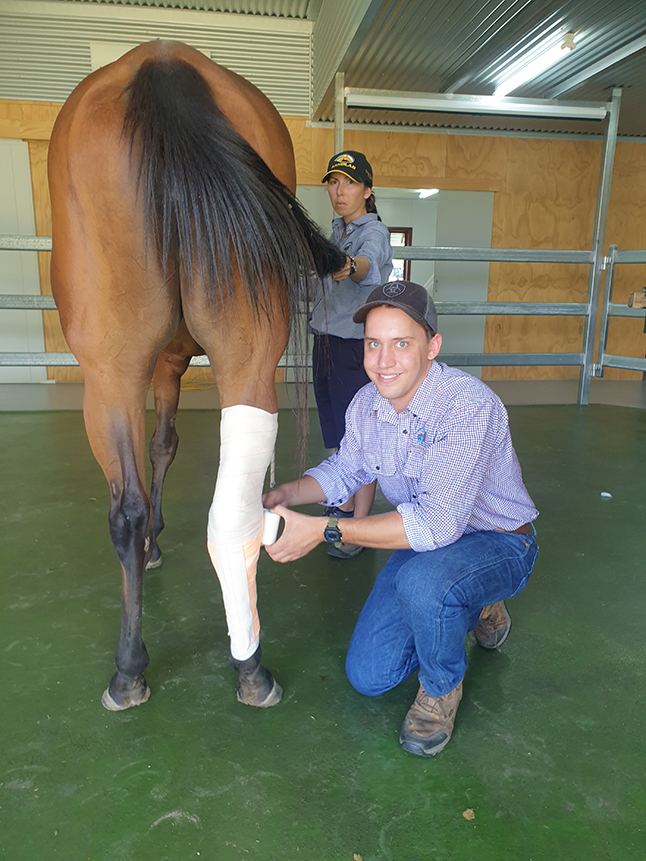 Chaylee began her nursing career in 2006 working in small and mixed veterinary practices. She has gained the qualification of certificate IV in veterinary nursing and has been with the WEV team since 2012. She enjoys all aspects of nursing, especially in the field of surgical nursing and radiography (X-Ray). Chaylee has a multitude of roles in the practice, from organising the vets, controlling the veterinary pharmacy and caring for all equine patients. She is very passionate about all aspects of equine sport and practice. Outside of work, Chaylee is a keen rider and is particularly fond of barrel racing.

Tamasin joined WEV in 2018. She also is a local girl from Thane and has had worked in admin as well as with horses before joining us. Tamasin is a keen barrel racer and along with her husband Michael are regulars at rodeos around Australia. Tamasin is the main co-ordinator of the practice as well as helping out with nursing with hospitalised cases and in the field

Danielle joined the WEV team in 2016 and has recently completed her veterinary nursing qualifications, Cert IV. Danielle has also studied a Bachelor of Applied Science, majoring in Equine studies at the University of Queensland, Gatton. Danielle loves working with animals, but has a particular interest in Equine nursing. Outside of work Danielle and her family breed and train Friesians focusing on classical dressage.

Odette has been with us now with us since 2016. She comes from a country background and manages to fit in helping us between looking after her two little girls. She is currently working towards veterinary nurse’s qualifications and her cheery and her enthusiastic help as well as her attention to detail have become a big asset for WEV.

Dusty has just finished year 12 and has gone from doing a few afternoons a week to regular work with WEV. Dusty has had lifelong experience with horses , growing up on her parent’s horse stud west of Warwick where she helped with breaking in, training and handling of horses. She also has a passion for showing cutting horses and preparing horses for sale. From a young age Dusty has always loved animals and wanted to become a vet or vet nurse, and therefore has been keen to join the Warwick Equine Vets team. She is also keen to pursue vet nursing qualifications to gain further knowledge in the discipline.

Heidi hails from a farm near Goondiwindi. She has previously worked for four and a half years in a mixed animal veterinary practice in Goondiwindi and during this time gained her certificate IV in Veterinary Nursing. Also, she recently completed a Bachelor of Environmental Science from the UNE. Heidi loves working with horses of all kinds, and especially thoroughbreds and handing some of her young horses.

SUBSCRIPTION FOR OUR LATEST NEWSLETTER

Please email office@warwickequinevets.com.au if you would like to be put on our newsletter email list. Include your preferred email address and, if you wish your phone number, so we can contact you if there are any problems setting it up.

CLICK HERE to read our latest issues of our
WARWICK EQUINE VETERINARIANS
newsletters.